The first steel bridge across the Red River, bustling flower night markets at midnight,… are interesting discoveries of the capital.

Probably, each month in Hanoi has one certain type of flowers in full bloom; therefore, musician Giang Son wrote the song “Hanoi 12 flower seasons” in praise of this beauty. In January, the capital is brightened up with peach blossom. In February, the purple color of orchid tree flowers covers every corner of the streets. March is the month of white “Sưa” flowers (Dalbergia tonkinensis Prain), April – easter lilies, summer arrives in May with red flamboyant flowers and purple crape myrtles.

Lotus season brings a pleasant scent to the West Lake in June. Dracontomelon blossom appears in July, chinaberry blossom in August. The passionate fragrance of milk flowers (Alstonia scholaris) is an iconic symbol of autumn in Hanoi. Seasons of white daisy and purple asters are in October and November. In December, clusters of golden canola flowers along the Red River are in full bloom, mark the end of the year. Photo: Hà Thành.

The names of 36 streets were originally named after the goods traded in there, for example, Hàng Gai (hemp ropes, jute ropes,…), Hàng Bồ (woven bamboo baskets), Chả Cá (fish cakes), Thuốc Bắc (medicinal herbs),…Nowadays, locals have changed into other trading methods but on some streets, they still keep the tradition like Thuốc Bắc Street, Hàng Bạc Street,… The Hanoi Old Quarter is so outstanding that it is repeatedly on the must-visit lists of famous international magazines such as Telegraph, CNN, and Independent. Photo: Kiều Dương.

Voted by The Guardian as one of the most 20 best food destinations in the world, Hanoi makes a great impression on foodies. Among various unique dishes, the egg coffee is on top of the must-try list.

Mark Lowerson, the moderator of Street Eats Hanoi, said: “Most of the customers love this drink. When I describe it, they can’t imagine how an egg can go with coffee. I haven’t seen anyone dislike the drink. Most customers want to come back to enjoy again, even some visitors who can’t drink coffee are amazed at the taste of the egg coffee.”

This typical drink was proudly served for international journalists in the 2019 North Korea – United States Hanoi summit. Some of the best places to go (recommended by CNN) were Giảng, Đinh, and Loading T. Photo: Deborah Findling/CNBC.

The largest ceramic mural in the world

Stretching almost 4 km along the Red River dike system, the ceramic road holds the Guinness record “The largest ceramic mosaic mural in the world”. Colorful, vibrant pictures are outstanding on bustling streets, all materials of them are ceramic tesserae from Bat Trang village. The mosaic represents different periods in the Vietnamese history. Artists started the project in 2007 and finished in 2010 to welcome the Millennial Anniversary of Hanoi. Photo: Diggers2004/Wikimedia Commons.

Train Street was popularly presented in the Culture Trip, SCMP, CNN. The trains still come through the street several times a day within a narrow distance, just in the reach of hand. Locals live and stick their life on the tracks just like any risks there. If they notice the light alarming an arriving train, everyone packs up all the stuff quickly and stands on the sides. When the train goes away, life goes back to normal as nothing happens.

The street is a unique characteristic of Hanoi and a favorite photography destination for tourists. “Marvelous”, “One of a kind”, and “Only in Vietnam” are words travelers describe Train Street on TripAdvisor.

Although it is an attractive destination, Hanoi’s Government considered to shut down in December 2019 to make sure all citizens and tourists are safe. Photo: Wayne Duncan.

Discovering Quảng Bá flower night market is among the best things to do in Hanoi recommended by tourists. CNN voted this destination as one of the world’s most beautiful places to celebrate the Lunar New Year (or the Tet holiday).

The market is on Au Co street, Tay Ho district, Hanoi. It’s among the largest and oldest night markets in the city. The market opens all night long, the busiest time in around 1 am to 3 am with the bustling sound of sellers, customers, vehicles,… It attracts tourists coming to visit and take photos. Photo: E.K.111/Flickr.

The raising and lowering the national flag ceremony every day

Visitors coming to Hanoi have chances to behold the raising and lowering the national flag ceremony at 6 am and 9 pm every day at Ho Chi Minh Mausoleum. The solemn atmosphere covers all the Ba Dinh square when the speaker signals the ceremony is about to take place. All citizens, even ones jogging or doing exercises line up to behold such a solemn ceremony. Photo: Giang Huy.

The first steel bridge across the Red River

Considered as a historical witness, Long Bien bridge was constructed from 1899 to 1902. The architect Gustave Eiffel – the designer of the Eiffel Tower – designed the bridge, it is 2,290 m long and the first steel bridge across the Red River. Nowadays, trains, motorbikes, pedestrians still have crossed along the bridge usually.

The bridge which is illuminated vibrantly at night, is a favorite destination for tourists in Hanoi. “What truly impresses me is the light. It is not the light that you can find in other cities in Southeast Asia. The lighting here is so soft and stunning. The feeling of walking on the bridge is interesting because I think it can collapse at any time. The feeling of scare and admiration happens together.” Der Hagopian, a Swiss tourist, shared with CNN. Photo: Thong Dong. 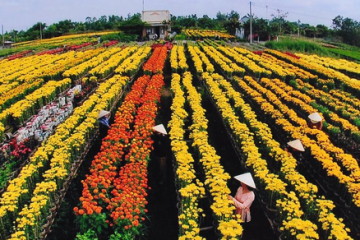 Leaving the bustling streets and hustle of modern life, come to the beautiful small villages of Vietnam to rediscover the traditional values ​​and identity of the homeland still existing there throughout the long evolutionary history Read more… 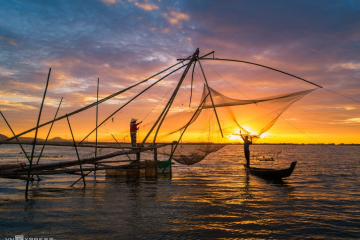 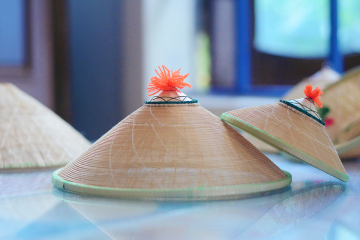 Over the past 300 years, local people in Phu Gia village have been keeping and developing their traditional conical-hat-making handicraft, highlighting the cultural identity of Binh Dinh province. This couple spent more than half of their Read more…

Shopping Cart
There are no products in the cart!
Continue Shopping